Hello, everybody!
I had been planning to fill this page in for some time now, but as it usually happens, when you start something like this, requiring constant care and attention, usually life gets suddenly very complicated and busy and you find yourself with no time whatsoever on your hands to do it. Name something, and it happened to me in the last month!

What I planned to do here is a little excursus of my writing story... I cannot say "career" as yet, for even if I started writing a long time ago, I never truly got published till this year.
As I look back in time, writing has always been one of the loves of my life... reading being the other one! I've been spending all my free time reading, ever since I was old enough to hold a book and decipher the words. My mother taught me to read even before I went to school (I was five) because she discovered that was the only way to keep a rather lively (some would say I was a real pest!) child sitting for some time.

Of course, the next step was to attempt to create my own stories, which I did orally, at first. I remember spending afternoons playing and pretending I was the character of some story having an adventure, and my dolls would be the other characters, of course!

A few years went by, and as a teenager I tried to put together my first short story... a Western, since at the time (toward the end of the Sixties) I was reading and watching mostly Western books and movies. As expected, the result was awful! It looked awful to my own eyes, but I kept that story for many years, just because it was the very first, before finding the courage to throw it away, as it well deserved: it had not an original idea in it, and of course it was written as a twelve year old could write!

After that, I tried again, writing mostly synopsis I never developed, ranging through different genres, but mostly adventure and Western... I still have those, and I think a couple is worth being developed in a real story, sooner or later. While at the University, I also wrote my first full novel (a Western, again) based on a B movie I had liked a lot. I still have that, because I think there is something worth saving lost in those 300 and more handwritten pages.

The true change came in the 1980s. I was already married by then, mother of two, and I was working as a translator. While attending a Sci-Fi Convention here in Italy I met my "idol", the Italian writer Mariangela Cerrino. Together, and with a few other friends, we launched into a big adventure, founding the Star Trek Italian Club in the year 1986. The club grew and prospered, and started running a couple of fanzines... and that was my first training ground as a published (even if not professional) writer.

I started with a few short stories, and when one of them (How do you Feel)  won the Italian Sci-Fi Award as best non-professional novel (1990), I decided it was time to try my hand at something a little more challenging, and so the short novel "The Caves of Arcadia" was born. It won the third place﻿ at the Italian Sci-Fi Award in 1991. For those of my readers who like Star Trek (the Original Series, of course) I'll publish a couple of my short stories here, now that I've managed to convert them from the Wordstar format they were written into to the current Word format... not an easy feat, believe me!

How do You Feel? 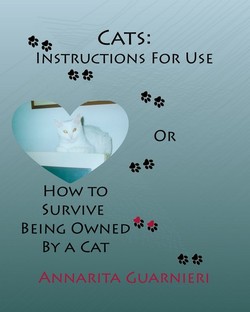 This new version of my book was totally different. The practical suggestions were still there, but "seasoned" and "flavored" with a lot of anecdotes - often quite funny - with which I explained the often hard way I had learned the things I was now trying to teach to new, inexperienced cat owners.
Getting a cat - or a dog - seems such an easy thing on the surface, but the truth is we are dealing with a living creature, with its own personality and its own needs. Moreover, there are differences if the pet in question is a stray, if it comes from a shelter or from a cattery, or if it was born in a home. Different situations require different approaches, and in my 22 years of life with cats I have acquired experience that ranges through all those possibilities. I'll post some of my stories in the page I created for my cats. Here I'lljust add this is a book that may come handy if you are planning to adopt a cat, but that will also make a funny and entertaining reading even if you are not, thank to all the anecdotes you will find in it.
A friend of mine, the translator and composer Giampiero Roversi, created a very nice trailer for the book, with its own original music inspired to one of the pieces in "The Aristocats" soundtrack.

More or less a year after Cats was published, while I was working at a totally different project, life intervened again. My old, beloved Belgian Shepherd Shine crossed the Rainbow Bridge on Christmas Eve 2013, at 13 years of age. Even if I'm first and foremost a cat person, she left a big hole in my heart, so much so that I still cry for her and miss her after almost three years. Her death dealt me a terrible blow, and in the following months I found myself unable to go on with the project I was working at because I felt the urge to write Shine's story. Actually, it was a rather weird experience because in those moments when my guard was down... in bed at night, or while doing house chores... I could almost hear her telling me her story in her own words... and this is how "The Importance of Being Shine" was born. 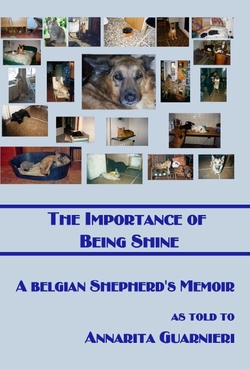 This book is Shine's life story as she literally told it to me, starting from when she was abandoned as a puppy in a ditch in January 1999, and through the 13 years of life together we had. Here Shine tells of how she lived those years and the experiences she lived through, such as having to deal with up to 59 cats, another dog and the rabbit, the terrible, notorious Infamous Rodent! All of it is shown as she must have seen and felt it, both the fun and the tragedy we lived through together.
I really felt compelled to write this book... I could tell Shine wanted me to write it... to keep her memory alive and to let other people know what a clever and sweet - even if at times difficult and nervous - dog she was.
Under some respect, it is also the story of part of my life, difficult years that would have been much more difficult to live through without the love Shine, Luna (my other dog) and my cats gave me. My daughters were already grown up and independent, they did not really need me anymore, and in very dark moments my furry, four-legged friends gave me the strength and the will to go on.


Of course, my friend Giampiero Roversi made another wonderful trailer for me, this time with an original music based on a song of the '70s I loved very much, "Doggy, doggy". In this case, the barking in the background is Shine's real voice, taken from a video of her I had. And do you now something really incredible? Even after three years, when I play that video and they hear her bark, my cats still look for her around the house, in the places where she loved to stay. It makes me cry every time!
Again, you can find "The Importance of Being Shine" on Amazon. Here are the links:
Amazon US: http://www.amazon.com/dp/B00B7C9KII
Amazon UK: http://www.amazon.co.uk/dp/B00B7C9KII